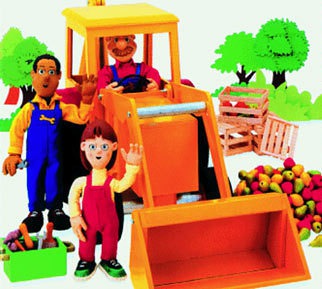 “This was a fun project! Dorling Kindersley, famous for their beautiful children’s learning books, asked me to come up with an animation concept involving two experts showing us round trucks and machinery etc. I said: “Okay but that all sounds pretty boring and unfunny and it won’t make a series. How about two blokes who make a mess of everything because they think they know what they’re doing but don’t?” And so ‘Dig and Dug’ was born. The only ingredient missing was someone who DID know what they were doing and could always be there to save the day – enter Daisy.

The scripts have a simple repetitive feel to them which young children love and which George Layton’s voice masters wonderfully. Terry Ward of Flicks Films (Mr Men & Little Miss, Bananaman and Nellie The Elephant), produced and directed the series and it was very popular, I still get people asking about it and it gets thousands of hits on YouTube. It also paved the way for the massively successful ‘Bob The Builder’ a year or two later –  how did we miss that?” -RE